A guide for building a complete Jenkins home lab

A quick note on updates to this article

Since this article was published the Jenkins community has begun the process of updating repo names and documentation to prefer agent over slave. I’ve tried to keep this article up to date with new URLs, however there may be some leftover references.

There are 2 steps to installing Docker. Installing the Docker service, and then opening the HTTP API port.

Further details are available here. We just need to run the following commands:

Security Note Adding the pi user to the docker group allows the pi user to control docker containers without using sudo. This might not always be desired as it grants some root privileges. More info here: More info available in the Docker documentation.

Security Note Adding the specified user to the docker group allows the user to control docker containers without using sudo. This might not always be desired as it grants some root privileges. More info available in the Docker documentation.

The easiest way to do this is to create an override file for systemd to add a new parameter for the Docker daemon. More details on this are here but the relevant details are below.

On the new system that is hosting Docker open a console and perform the following.

Copy and paste the following config into the new file

Save the file, and then run the following commands

You can verify this is working by navigating to the appropriate URL in your browser which will display some version information in JSON format.

Security Note In a production environment I’d recommend using TLS and adding additional security to secure your environment. In this case your port would also become 2376. This is discussed in detail here.

Now that we have a Docker server configured, let’s create a container image that can be used by Jenkins. Jenkins already has an example docker container which we’ll base our image off. I don’t use this one as it won’t work on Raspberry Pi Docker services and I prefer an image based off Ubuntu for my other images.

Jenkins will connect to this container via SSH, so it needs to inject an SSH key into the image. The repository here contains an example of how to do this. This is what we’ll fork.

The changes I made to this are minimal, and can be seen in this commit.

I changed the base image to Ubuntu 18.04 for x86 images, and I included a step to install the default java runtime environment.

The key part of the provided example from jenkinsci is the script setup-sshd which takes an environment variable, JENKINS_AGENT_SSH_PUBKEY (previous versions called this JENKINS_SLAVE_SSH_PUBKEY if you forked from an earlier version), and inserts it into the authorized_keys file before starting the SSH daemon. This allows Jenkins to connect to this Docker container via the specified SSH key.

Security Note I haven’t been able to find a consistent source for up to date Docker container images on Raspberry Pi. The Hypriot ones seem to be quite popular though. These should be fine for a home lab, but I’d recommend sticking with x86 images in many circumstances as they are updated more frequently.

For this step you need to log in to your Docker Hub account which will host your image.

The repository has a makefile which I recommend you update, but for now we’ll just build and push the image manually.

From the directory where the Dockerfile is located run the following commands.

Security Note It’s not critical for a home lab but you should update the Makefile and setup a job in Jenkins or via DockerHub to automatically build and push this image so it remains up to date.

All that’s left now is to get Jenkins talking to this new Docker host, and setup how to use the newly created image.

Click on the Available tab and search for “Docker”

There are numerous plugins that will show up, we want the one that has the description “This plugin integrates Jenkins with Docker” and is linked to https://plugins.jenkins.io/docker-plugin/

Tick it, and click Install without Restart. On the next page press “Restart Jenkins when installation is complete and no jobs are running” to ensure that everything is ready to go. 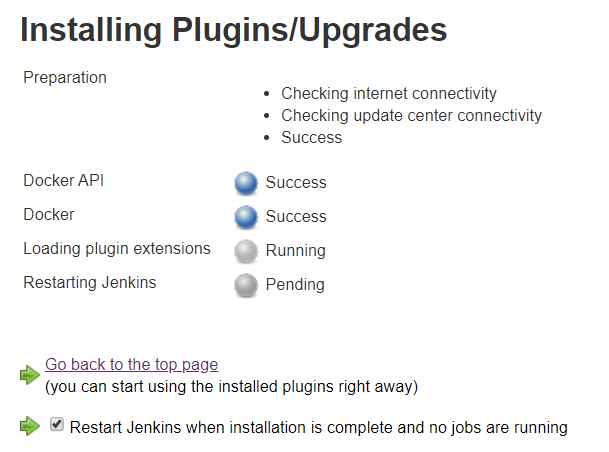 Once it is installed we can configure it to point to the Docker host.

Scroll right to the bottom to find the new section Cloud. 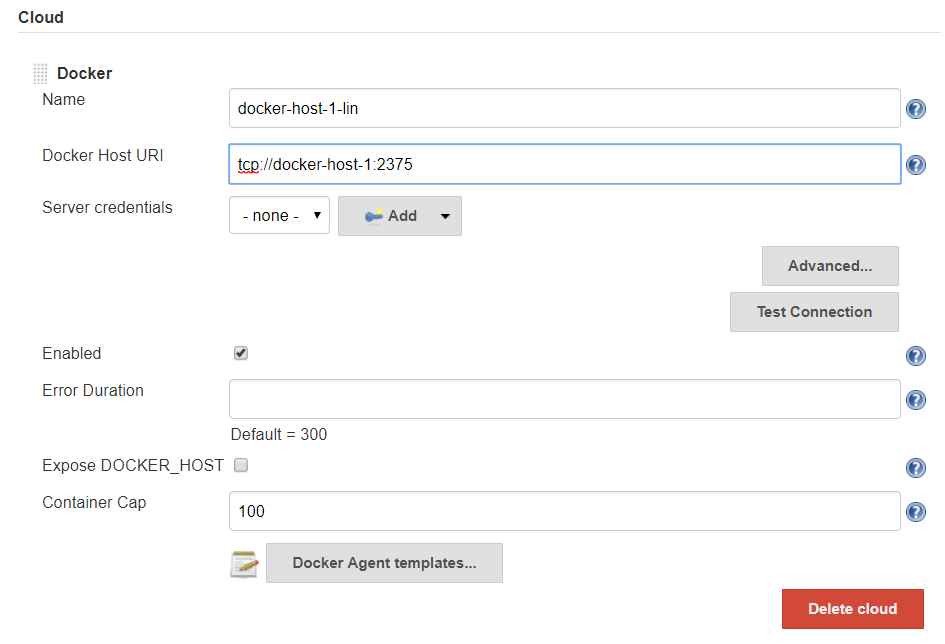 Give it a name for your reference, and enter the following URI, changing your hostname.

Security Note Again, in production I would look into setting up TLS and authentication for users. Make sure to set your server credentials here in this case. 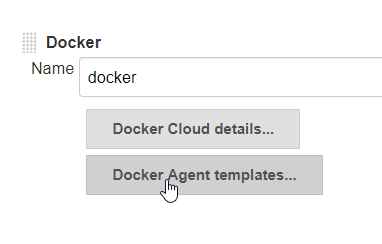 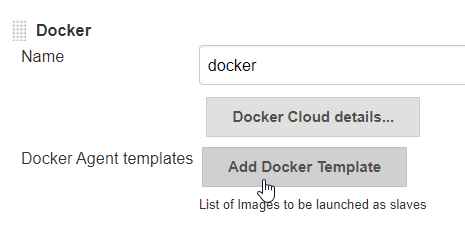 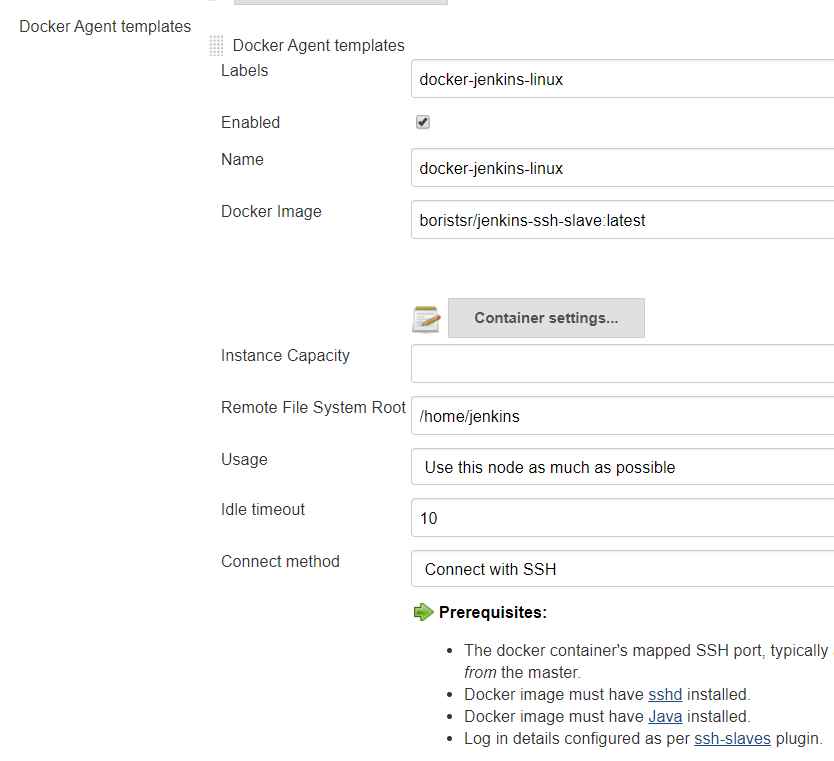 Under Environment, you want to add a line like this:

This sets an environment variable that the script discussed above will insert into the authorized_hosts file by the setup-sshd script in the Docker image discussed earlier.

Note If you are using the original jenkins image, you will need to set the JavaPath option under Connect Method->Advanced to point to the appropriate java path, as it’s not in the path for the jenkins user.

Also make sure to check the option for Remove Volumes. I enable this to reclaim more disk space after a job has completed. Your use case might want to preserve these.

That should be enough to configure our first image. You can tweak these as you see fit for future images.

Now we’ll set up a new job to test the new image. On the Jenkins main page click New Item. 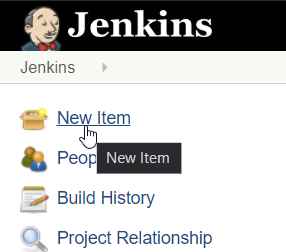 Enter a name for this job, and choose Freestyle project and click next. 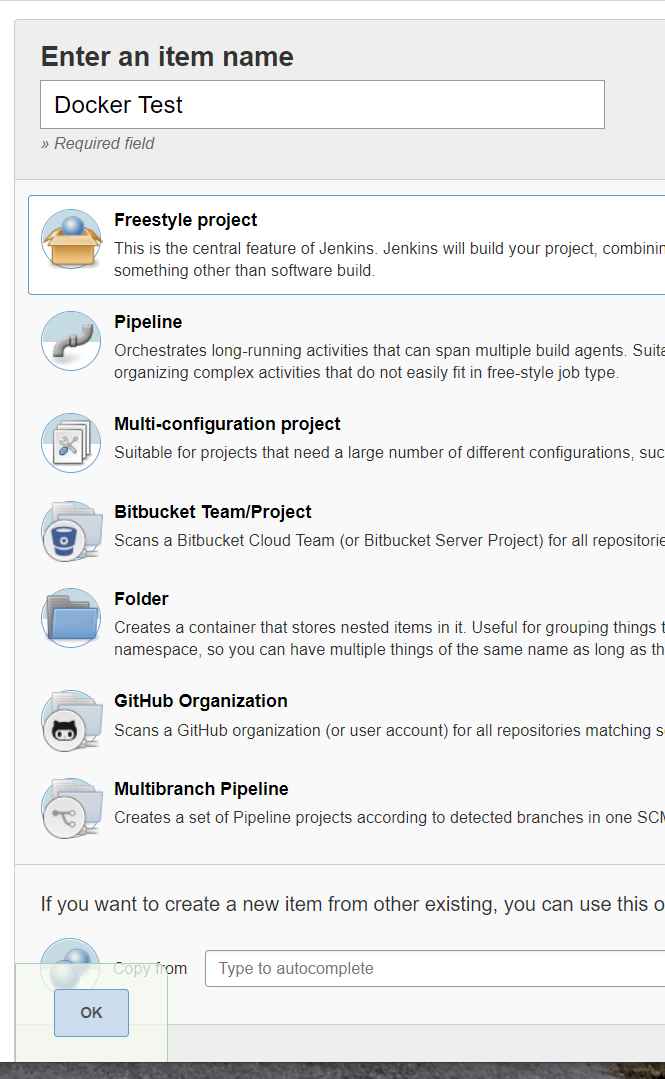 Tick Restrict where this project can be run, and then enter the label that you configured for your Docker template. 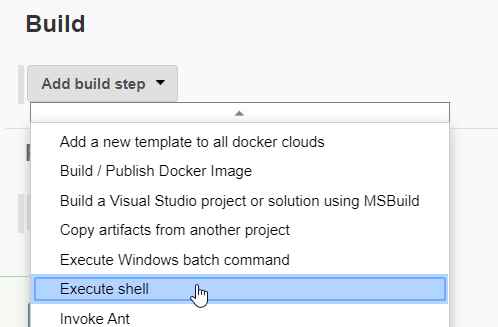 This will print out the authorized_keys and show that the public key we specified was entered there, and also some basic system information.

On the main page of Jenkins, click the Run Job icon next to our new job.

If all goes well you’ll see the new agent start up. It may briefly show as offline as it initializes, and then it will complete the job rather quickly. 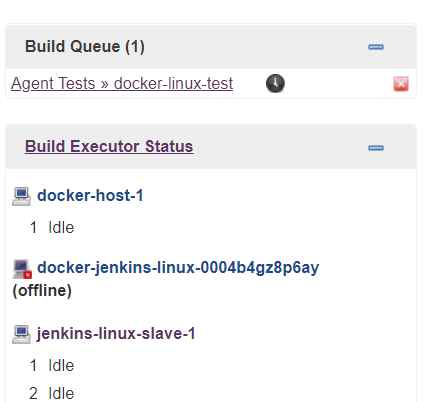 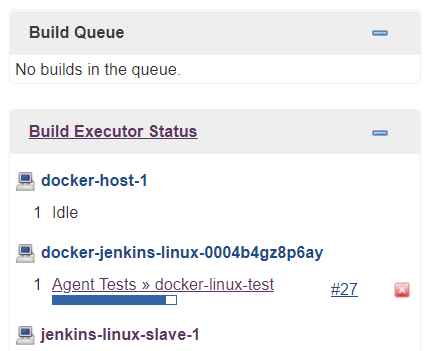 Click on the job name, and then click on a build under Build History to see information about it. Clicking Console Output will show the information that we expected to print out. 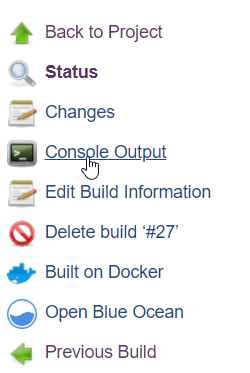 Once you have a base Docker image you are happy with, it should be fairly easy to create a new Docker image that uses your base image and installs any dependencies required for specific projects.

As an exercise in the meantime try creating a job that automatically builds and pushes your image to DockerHub.